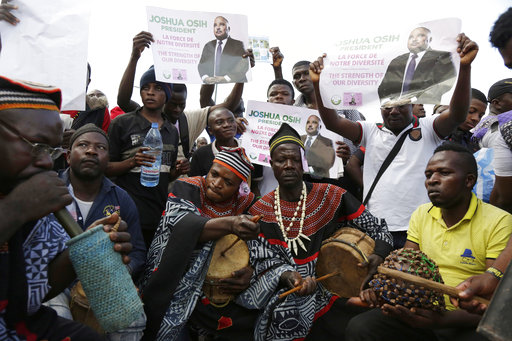 The Norwegian Refugee Council terms Cameroon’s Anglophone Crisis the world’s most neglected crisis.3 In the midst of near-countless environmental, political, and humanitarian crises around the world, this complex sub-Saharan conflict has failed to capture global attention. The Anglophone Crisis is a civil war that is now dragging into its 5th year. It has polarized the country and broader region, fracturing a nation that was once one of the safest and most united in all of Sub-Saharan Africa. Today, with the death toll of this conflict rising past 4,000 and more than 750,000 people displaced, the Anglophone Crisis desperately needs to be resolved.2

Unfortunately, many interrelating factors are preventing a peaceful outcome. Foremost is the Cameroon government’s violent quelling of organized opposition, which has only sown discontent, and antagonism. Second – and arguably even more complex – is the crisis of leadership among Anglophone revolutionaries. The opposition no longer has a unified front and has fractured into several competing factions, which makes peace talks nearly impossible to organize and enforce. At this point, peace is difficult to imagine, much less to pursue, but there are several political and institutional steps that could help. Among the systemic solutions that have been proposed, this article will investigate and analyze the prospects of the Cameroonian government’s main options – outright military suppression or socio-political appeasement, and the prospects of a return to a federal government.

To understand the current state of Cameroon, some historical background is necessary. When Germany ceded its colony of Kamerun to Britain and France after World War I, the two Allied powers split the region, with Britain controlling the western portion and France controlling the rest.4 In the 1960’s, Western Cameroon lobbied for full independence, but the United Nations was insistent on institutionalizing a unified Cameroon. As a result, Eastern and Western Cameroon–previously operating under two vastly different colonial structures–compromised to form a federal democracy in which both regions would send representatives to the national government. However, Cameroon’s first president, Ahamdou Adjo, repealed this system in 1972, and he and his successor, Paul Biya, spent decades solidifying a unitary system that marginalized Anglophone needs.4

In response to decades of political sidelining, widespread protests broke out across Western Cameroon in 2016, with the primary demand being adequate political representation. The government’s response to this was an unmitigated disaster: extrajudicial killings of unarmed civilians and suppression of independent media reportage.2 This enraged many Anglophones, who now demanded full independence under the flag of Ambazonia.

After 4 years of brutal guerilla warfare and war crimes committed against civilians by both separatist and government forces, no clear resolution looks possible. To make matters worse, de facto secessionist leader Sisuku Ayuk Tabe was arrested and handed a life sentence in a government prison in 2019 on grounds of terrorism and secession.2 This split the Anglophone militias into countless factions, with little or no leadership or oversight. The present situation is one of mass confusion, indiscriminate bloodshed, and anger on all sides with no clear path to peace and reconciliation.

Surveying the recent history of this conflict, it is evident that the Cameroonian government must alter its strategy drastically if the Anglophone Crisis is going to be resolved in the near future. So far, Paul Biya’s regime has tried to quell the uprising by brute force and suppression, but this has backfired spectacularly by throwing fuel onto the flames of separatist anger. Many local and international mediators have worked hard to establish peace talks, but these either do not lead to enforceable changes, or are seen as untrustworthy or untenable by one side or the other.1 To break this cycle, the government must switch tactics from “non-negotiation with terrorists” to genuinely committing to systemic reforms and concessions to Anglophone demands. The path of war only leads to a more-entrenched resistance, and with millions of civilian lives at stake, Biya must try other strategies.

In 2019, the government participated in a series of peace talks called the Major National Dialogue. Unfortunately, this conference accomplished nothing because separatists were barred from participating and the government would only negotiate with non-violent Anglophone groups.1 While the government made an important political step in releasing one jailed opposition leader, Maurice Kamto, it continued to stick to outright military suppression of separatist sentiment in the western regions of Cameroon, further hardening the opposition’s stance.1 It is clear from years of experience that trying to stamp out secessionists through brute force is simply not going to work; peace can only come through mediated discussions that allow representation from every major political actor and group.

It is crucial to note that appeasement can go too far in this situation. Full secession is untenable in the present climate as it is absolutely unthinkable to Cameroon’s current government and its supporters in the AU and EU. Separatist leaders themselves are far too disunited to adequately manage an independent state, not to mention that such a state would be surrounded by hostile neighbors in Nigeria (a close Cameroonian ally) and Cameroon. Secession would have disastrous humanitarian consequences, amplifying the government’s military response into a full-on civil war that would wreak havoc on the region. A middle ground must be found between violent suppression of Anglophone protests and full independence of the Ambazonian state. This requires the government to soften its current hardline position and begin negotiating with secessionists so that they may come to some agreement and understanding.

The first, critical step to peace is the release of Sisuku Ayuk Tabe. Without such a clear signal that the government is ready and willing to concede meaningful reforms to Anglophones, the separatists will remain divided in their demands and approaches to the conflict. By releasing Tabe, the government can ensure that separatists will coalesce around the common goal of peace and better representation, isolating the hardline elements demanding nothing short of full independence which are bolstered by government atrocities. In fact, Tabe and his supporters originally favored peaceful protest methods such as boycotts and marches to rally the Anglophone cause.2 This shifted when the government declared war on the protestors and began firing on unarmed civilians during the 2016 protests. His release will also be seen as a positive, conciliatory move that the majority of Anglophones will approve of, creating a working understanding that can expand into more effective, consensual, and popularly supported, internationally mediated peace talks.

Once at the negotiating table, it seems likely that the best course of action is for both sides to compromise on a new political structure, potentially including a return to federalism. That system, with multiple states voting for representatives in national government, along with decentralization of education and the judiciary so that the British-influenced Anglophone systems can maintain independence from Francophone systems, would be critical to reaching a popular resolution.2 Such a compromise would also need to be certified by the people of Southwest and Northwest Cameroon through a regional referendum, which would signify the impossibility of secession based on the people’s sentiments.

The implementation of a federated system is no easy task as it would depend on  the government’s softening of their hardline stance on protest and would require agreement among the currently fractured separatist cause, Cameroon’s government – and international actors such as the US, AU, and EU – must start the process of trust-building by releasing prominent separatists from jail, beginning negotiations with secessionists, and ramping down military actions against militias. Nearly all Cameroonians can agree that the end goal in the Anglophone Crisis is an end to the violence. The way to create this effective and durable path to peace  is to prove that the Cameroonian government is ready, willing, and able to listen to its people’s demands.